Jim is a First Nations person, who had cycled over the creek’s bridge when he stopped to ask, “Are you a monk? Have you been to Tibet?” So I answered. He knew I was about to cross the bridge myself and mentioned there are lots of spirits that go to this bridge. When I handed him my mantra card and the mantra’s translation, he liked the word, “Creator.”

“Do you believe in a creator?” I asked.

A young man, about twenty-five, Ray, was my next encounter. There was no intro or protocol. He just opened up over the course of our walking. We communicated on the topic of spirituality, him being a Catholic in belief and perhaps practice. Mutual respect came out of that five minute interaction. It was great. I then gave him the mantra.

Further along I met Anshul, a student at Confederation College. He holds two jobs, apart from his studies, and it was his legitimate reason for passing on attending “The Festival of India,” which was my purpose in coming to town. I left him with the mantra, to which he was grateful.

Then Stephanie, who, on one of those electric bikes, made a U-turn to come over and check me out. She simply asked if there was anything she could do to make my stay more convenient. I took from that, and the spirit of all others I encountered on this walk, that greeting and gratitude is what makes a human.

By the way, The Festival of India was a success, despite Covid 19. Approximately 130 cars were parked in front of the outdoor stage to view and hear excellent dance and music presentations. 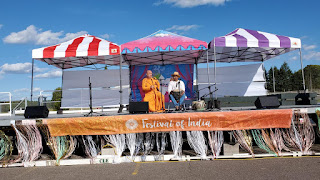 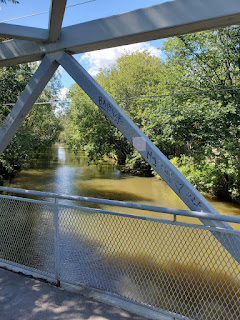