There were bright moments, even minutes, of the day. For instance, Sanjit was kind enough to take me to Cherry Beach once again, for a physio session. By that I mean submerging in the water for some time, which was the best approach to soothing any stiffness. Today’s grain-less diet, due to the ekadasi fast, was also a high point. And then there was the walk with Victor.

Victor, a young school teacher, who sprang upon me in Ramsden Park some months ago, has been keeping in touch. On our evening trek to Bloor and Manning we talked about clothing. We both concurred on how clothes play a major role in one’s life. There we were walking, he in his Islamic attire—all white, even to the white socks with the “puma” insignia on them, as well as white shoes. And there I was in a spanking new set of saffron robes from India, with sandals to boot.

We passed by a middle aged pedestrian male who said, “You guys look alike!”

We carried on talking, quiet on the same page about proper attire. Clothing should not be irritable, but comfortable. Pants are one of the worst inventions. Clothing should not be so tight that you have to peel it off before going to bed. (Chuckle). Our attire should cover the body. We admitted it’s orthodox to say; I suggested “if you don’t dress chaste you will be chased.”

Have you ever noticed how people are embarrassingly tight with their clothes, and don’t have the figure for it? It looks bulgingly ridiculous. Never wear a design with horizontal stripes. You’ll appear twice the size. Of course we are not these bodies but we should apparel ourselves in respectful ways. 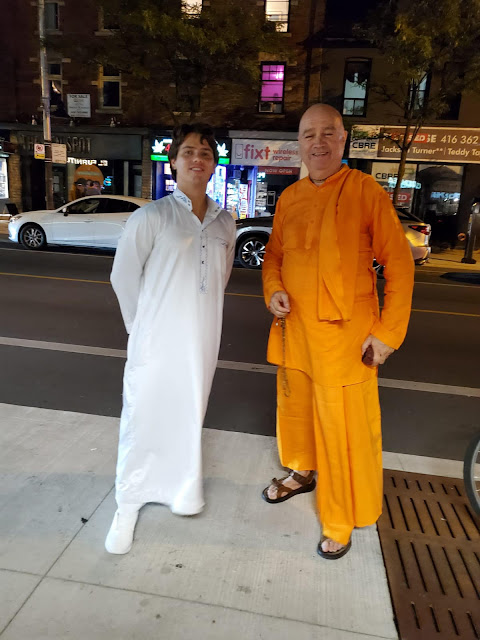