It’s been six months since my last plane ride. A West-Jet aircraft took tabla player, Ananda, and me to Thunder Bay. Before embarking on this two hour, seven minute flight, the attendant at the entrance offered each passenger a sanitized white cloth.

“This is for your seat,” she said. However, the mask over her mouth muffled the sound that came out. I thought I heard her say, “This is for your feet.” I heard her say it to the passenger in front of me, to me and to Ananda just behind me. “For your feet,” is what I heard. That’s strange! It seems like the world is becoming more Vedic or Indian after all. My mental image painted a picture of people washing each other’s feet. How extraordinary! When I saw one chap giving a wipe to his seat my delusion was dispelled. I was just in a twilight zone for a few seconds, I guess.

Bearing a mask across the face while on the plane was not so easy. They are quite strict about paraphernalia blocking one’s mouth and nose. We should appreciate that, however, it is for everyone’s safety.

Prem Kishor, who manages the annual “Krishna Festival of India,” had come to pick up Ananda and me from the Thunder Bay Airport and then bring us directly to a newly purchased building, a Masonic Temple, built in 1972. It will be transformed into a Vedic Cultural Wellness Center and will include living facilities and a temple area for meditation and therapy. The project is most inspiring.

0 km walking, however, effective physio-therapy was done before departing for Thunder Bay. 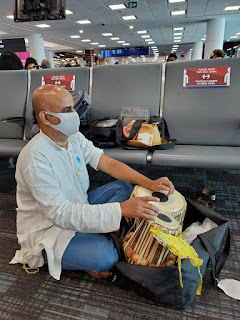