It was restful at the farm in Mascouche, called Nandagram.  The visionary behind this world project is a friend, Anubhava, a native of French Canada.  He was kind to take me down the rural back road along the country creek and cornfields, on foot.  It was with another Quebecois, Jagannath, who indulged in some bean harvest after the walk.

Yes, we got down to the humble position of bending our backs while bending the plants to expose the pods, and then pluck them.  There were two rows to harvest, and then transport in a sizeable bin, these nutritious sources of food.  It became addictive.  Really.  We didn't want to stop picking beans.  For me, I feel I'm a natural gatherer, a characteristic which played a major role in my adolescent years.  I felt right at home here.

Another Quebec bhakti-yogi, Narayanajvara, drove me to another retreat operated by The Art of Living folks.  One hundred and fifty people had registered for a weekend at a Vaishnava Sangha thus far in this beautiful haven of the boreal forest.

These summer retreats are of paramount importance in the lives of humans, what to speak of yogis like those of us grouped here.  I have committed to preventing a “Nine Devotions Workshop” for the attendees.  It should be fun.

Speaking of fun, a good number of us are honouring the birth anniversary of Balaram, who as a child was light and frivolous, and who went on to become a champion walker.  He was a real padayatri.  A pilgrim. 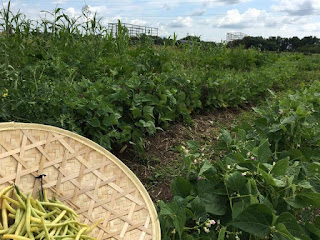 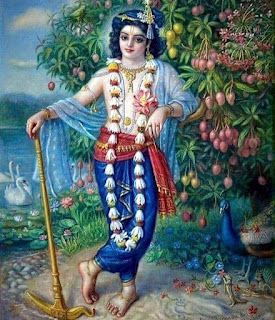 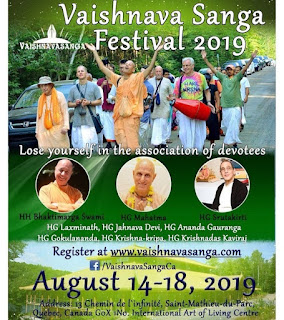