Fighting a cold, I decided to sleep in through the morning program.  I just had to.  I didn’t want to disappoint the other members of the ashram with my absence, but sometimes it is necessary for recuperation.

Fred came in—as he often does—to Govinda's, our restaurant.  "It's my day off," he said, with relief.  He loves the food at Govinda's.  He also likes to chat about the latest.  He said it's an anniversary of Charles Manson.  "During the summer of Love (1967), people kept their doors wide open in the San Fran area, but after Manson, everything changed.  Doors were locked."

My conclusion, and his as well, is that this material world can be a dangerous place.

There were many interactions with people throughout the day, including sitting down with a young couple and jotting down their marital arrangements for September.  By 9:00 p.m., it was time to hit the street.  Who can bear the heat of a summer day?  I find it tough.  Night strolling is for me.

I made it to Bloor.  All was fine until the garbage truck came around to empty the bins along the street.  You know what it's like—the stench—especially on a hot, sultry day.  I would rather get sprayed by a skunk.

A homeless fellow, somewhat unkempt but with a certain sex appeal, accepted a woman's five-dollar bill, and as she was about to start off with her male friend, the beggar asked her, "Will you marry me?  He may be your boyfriend but that's beside the point."  The woman was all giggles. 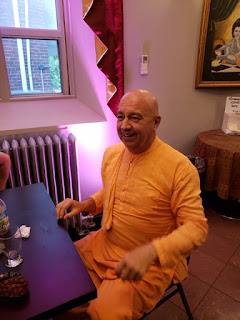