Covering a two day blitz of bhakti was a fun type of back-and-forth shuttle between three cities. And below are the highlights.

First, our small troupe of monks drove to a region outside of Moncton (perhaps one day we could change the spelling to Monktown) and there, just off of a panoramic ridge on Indian Mountain Road, was our destination for five hours of devotion. The setting, a rustic barn transformed into a place of living accommodation, and craft and yogic functions, was the place for kirtan, food, talks, dances, and also a fire ceremony for Camille, a young teen from Quebec, to take her diksha, initiation.

Camille has been inspired all along, since birth, by her father Etienne, to pursue devotion.  Her new name is Kunti Devi.

I was surprised to see Prabhapati, my godbrother, an artist who painted excellent renderings for the book extraordinaire, the Bhagavatam. Good company!

Our two day adventure also entailed a sangha, or gathering, at Kadambha's place.  He now calls his home the "Krishna Centre Fredericton."  It's a new venture for him in the wild setting of New Brunswick, an under-rated part of the world, in my opinion.  People came, several families, and bachelors.  We contemplated a verse from the Gitawherein Krishna, the ultimate mystic, declares Himself as aja, unborn.  We spoke about that.

We also spent time at Lake Killarney where a band of Bhutanese folks came to introduce themselves as very committed members of the Vaishnava tradition, which is ours.  I was assisting Nicholas with his memorization of his lines for our next play, when a swarm of these happy people came to our spot of grass.  Finally, a drive to Saint John was scheduled for a kirtan at the Wellness Centre across from the St. Joseph Hospital. T'was cool! 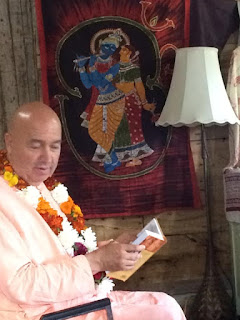 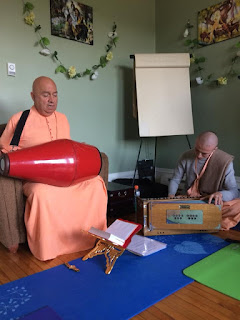 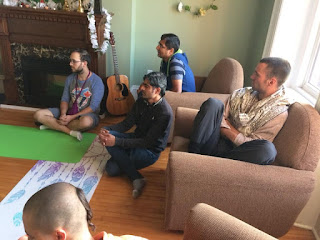