Ramsden Park was full of life and teaming with energy. It was as Sunday should be, spent as down-time.  The basket-ball court was the most congested with so many participants, all young men, bouncing the ball and shooting the hoop, sometimes missing. Baseball interest seems to be waning these days. The diamond was quiet. And tennis courts? Also full with people cued up in the sidelines.

Then I saw a group of men and women had set up a game of croquet. I thought it was an old man’s sport, but here I could see that maybe it’s of interest to a younger set. In the centre of the park you have youngsters at the monkey bars and other playground equipment while at the west end a fenced dog area drew yet another crowd.

As an observer I participated while also becoming a sun bather. No, I didn’t strip down to the waist, I’m too old. Besides, I never had a physique that would attract anyone, even in pre-monk years. I was a skinny something-or-other. Sitting on a park bench I was soaking in the sun before it does its dip to mark the night.

With orange to gold yellows as trees around one cyclist said, “You blend right in to the environment.” referring to my monk’s attire.

The only thing missing in the whole park, being busy like a bee-hive of activity, was the simple spiritual touch. At least for a short while I fit the bill. I was on the bench chanting the mantra. 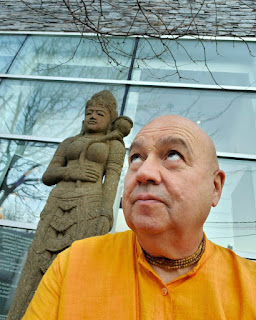