I’ve been doing stretching exercises before resting. It’s helping the legs and the other body parts. I would like to encourage all readers to do their bodies a favour. Exercise. Because we are independent, to some degree, we make choices. Let us be wise and make the right ones.

I would like to share an excerpt from the Gita which addresses the topic of our independence. Bhagavad-Gita 15.7 purport:

“As fragmental parts and parcels of the Supreme Lord, [we], the living entities also have fragmental portions of His qualities, of which independence is one. Every living entity, as an individual soul, has his personal individuality and a minute form of independence. By misuse of that independence one becomes a conditioned soul, and by proper use of independence he is always liberated. In either case, he is qualitatively eternal, as the Supreme Lord is. In his liberated state he is freed from this material condition, and he is under the engagement of transcendental service unto the Lord….”

I was blessed today to read this message. I was also blessed to deliver four classes, one via Zoom to a group in Vancouver. The others were to our group of monks in Toronto and to Cameron from Hamilton as well as Gabriel from St. Mary’s.

Let us all pray for America. Elections are tomorrow. The results of that election will impact us all. 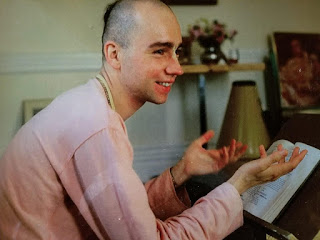