For those who do not know, today is Diwali, the festival of lights. The commemoration has much to do with Rama’s triumph. There is a video circulating out there where Prince Charles is offering his best wishes to all followers of Rama. After all, those who follow Krishna also follow Rama. Hare Krishna Hare Krishna Krishna Krishna Hare Hare, Hare Rama Hare Rama Rama Rama Hare Hare.

Celebrations took place in the city that I live in and also in the temple where I live, where congregants and curious soul searchers were allowed to come, in a limited way, to honour Rama, view our deities and have a take-away meal of Krishna prasadam, sacred food.

The way I gave my services to Rama on this day was by completing the filming of “Rolling the Dice.” In the final and most compelling scene of the drama, the very wise Vidura attempts to give counsel to his older, aging and blind brother.

Our remarkable crew made its way to the castle known as Casa Loma, to capture the palatial building for background effects. We capitalized on the greenery, or what’s left of it (it’s fall), to add a touch of nature. In this scene Vidura attempts to encourage his stubborn brother, Dhritarastra, to downscale his luxurious lifestyle for that of a simple mendicant. He advised him to go to the north, to the cleaner air where sages reside, giving their last attention to what lights up the world—God. 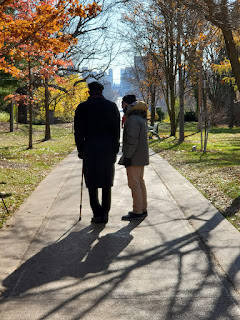