Back at the temple ashram, downtown Toronto, movers came over to empty out the excess paraphernalia thus freeing up the building from potential danger, such as the fire hazard it had created. A kind member of our community, Mukesh Gelda, allowed space in his warehouse, the new home of this paraphernalia; materials that are used in North America‘s largest Ratha Yatra, the Chariot Fest. We are grateful for the service he is offering and I want to thank Rudradev for organizing the move, as well as the workload taken by Karuna Sindhu.

And thank you movers. I didn’t get a chance to know you well enough.

During the move I was occupied with the filming of our drama, “Rolling the Dice,” a story which clearly exhibits Krishna’s heroism. Just as the movers, all very respectful Jamaican guys, we’re about to leave I asked them if they would give 10 minutes to act as extras for our fight scene. I needed numbers. Well, they declined, feeling unprepared although one of them expressed he was an extra in a movie some time ago.

For me, I felt a sense of accomplishment because our filming session went well and all the clutter was removed from the temple. It seems like a burden was lifted. It was like a spring cleaning.

For the evening Nanda picked me up for a small gathering at Mita’s home in Brampton. No trick-or-treaters came to the home. Covid 19 is the new Hallowe’en. 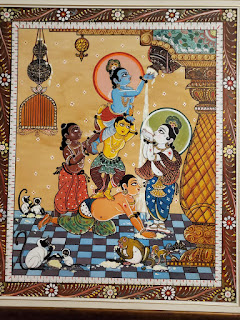