On Both Sides of Me


Mine Centre, Ontario
I have jack pine, black spruce, birch, some maple, and more trees on both sides of me. The road is solid with few cracks in it. Wild life leaves there stool samples to the edge of it. I can sort out the bear dung, the rest could be fox, wolf or coyote. I believe I see every piece of feces common to this area, except for moose and deer droppings. In any event, the highway is someone’s idea of a toilet.
I reflected on last evening’s event. I took a second installment of trekking when I met Wandering Thunder, that’s the name of a local Ojibwe. His wife and whole family were in the vehicle sitting at ease, but when they heard their dad talking to a wandering mendicant, or rather, a monk, the boys in particular got excited. While we busied ourselves in taking photos alongside the road, a motorist pulled over inviting me to a Mennonite church service. I accepted. When Wandering Thunder bid me farewell, he remarked, “The Ojibwe had powerful legs and feet, they had to catch their animals, eh?”
Daruka and I sat in at the Christian service, more of a prayer/discussion session really. The congregants sat in pews, men to the right, women to the left. They spoke mostly from Revelations about the other world, how to perceive the angels? Are beasts actually in heaven? Are there babies or the aged situated in Heaven? They pondered these interesting points. Then some prayers were conducted to honour any recent deceased in the community and also for those struggling in life, as well as a mention of a family parting their own ways.
The group was totally gracious dealing with Daruka and I, and they were reciprocally wanting to know about our pilgrimage.
At 1:10 pm I have a presentation to students at Mine Centre School, grades 5 to 8. They were all indigenous kids. They liked chanting. I relayed to them how you might think of yourself as Ojibwe or Cree or Mowhawk, but ultimately we are none of these, “We are spirits.” The kids had lots of questions. As a gift from the school Daruka and I received a harvest of fresh veggies and fruits set in an ornamented box. Nothing is better, especially when it comes from the garden. Thanks, Jen. I’m certain there are angels on earth.
31 Km 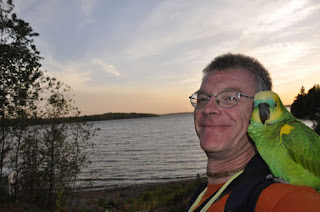 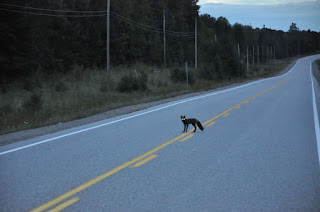 Young fox on Highway 11 by Mine Center 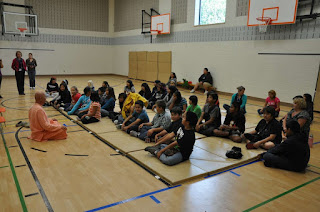