Consistent Sun
Emo, Ontario
The consistent sun and still air has made the project of walking so appealing in this central part of the country. What also has made this feeling of contentment more aggrandizing is the positive public response. People that I meet remark: "I saw you the other day!"; "I heard about 'cha;" "I seen ya walkin' Eh;" and, "Everybody's talking about you!" Those are the kind of sunshine remarks that are coming.
Aaron, of North Bay, is part Ojibwe and is taking law in school hoping to reintroduce traditional law policies for the First Nations people. An even younger Aaron, led Daruka and I to the town of Stratton where huge burial mounds are located. These sacred mounds are the remains of hundreds of years of ancestors. It was awesome to be there and honour those souls of the past. Older Aaron and I were comparing notes of the ways of the Ojibwe and the Vedas of India. The use of herbs are stunningly similar. Young Aaron's granddad Willy Wilson was our lively tour guide. There was a mutual willingness to hear from each other culturally about the way things are done.
By the time we saw these sights, I had covered 20 kilometres on foot. During that walk, I met one of the organizers of the world renowned Terry Fox Run Research for Cancer. Daruka and I had intended to participate in the run. I came in to register somewhat late, but I got my five kilometres in. This was followed by a luncheon at the Methodist church. Daruka and I came in along with Billy the parrot perched on his shoulder. Those who were present were delighted. We were introduced to all the runners and walkers. A round of applause came upon us after I mentioned that it would be a good idea to bring back to focus the ancient way of the ancestors - pilgrimage. We were received with warm hearts. And, we enjoyed eating what we could with the people in the hall.
Daruka and I departed for our booked room, and as I turned the corner the driver was an old friend, general surgeon, who was as shocked as I was to see each other. He moved to Fort Francis three months back. This encounter just added to the appealing nature of the area.
30 Km 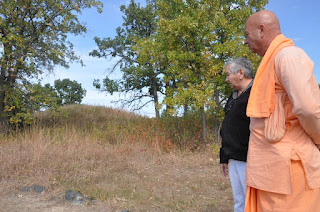 Elder Willy Wilson, our tour guide at the sacred Kay-Nah-Chi-Wah-Nung (Place of the Long Rapids) burial mounds, near Stratton, Ontario 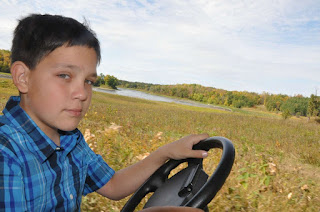 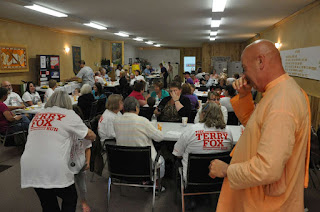