Can’t Be All That Bad

As the sun was stretching it’s rays toward the east at late afternoon, I passed by several pedestrians, all having something to say, except for one, who whistled.

As an elderly man with his walking dog looked up at me—after bystanders looked at his pet—and addressed me with a smile, he said, “It’s spring I think.“

“Perhaps,“ I concurred with a mutually hopeful tone.

Down along Designers Lane, I could see a young woman leaning from her three-storey balcony (like a setting from Romeo and Juliet) yelling to her friend at the street level below, “Crazy times, huh!“ For sure she was referring to the virus scare, the shut-downs, emergency hype in the air.

And, of course, there was the guy whistling a happy tune as he walked into the sun’s rays. Whistling is kind of a guy’s thing. In some cultures, whistling is a bad omen attracting evil or ghosts. I don’t think that was this person‘s intent.

It was a good stroll overall, in the late afternoon, happening after a quick in-and-out drive to Hamilton to see my old friend, Visvakarma, who was instrumental in bringing me to my spiritual path.  Jivan Mukta from Toronto drove us to St. Clair Boulevard. Traffic was swift. Roads are more clear. Yes, indeed, businesses are down. The times are crazy, but when you see an abundance of people going around on foot, well, it can’t be all that bad. 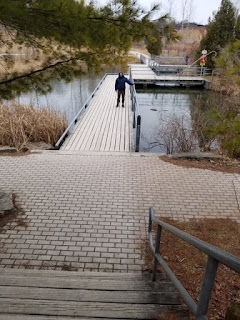