Dreaming About the Yukon

When I visited the Yukon, not so terribly long ago, I received a small gift—a key chain.  Attached to this key chain is that iconic image of backpacking prospectors, struggling up a steep snowbank by way of a rope.  This represents the famous Yukon Gold Rush that took place at the turn of the 20th century.

I'm intrigued with that historical time, not with the lusting for gold, but for the fact that folks were adventurous and willing to take risks starting a new life in the great north.  For me the image is about travel, on foot.  In 1896 when the rush began, there were no vehicles, specially up in that remote area.  The people in their wanderlust were gutsy.

After a long but progressive day and putting a closure to it (delivering two classes), I took a brief walk for air.  I took with me my usual—my cell, my japa meditation beads and my key chain with keys, so I could get back into the building.  I was contemplating that extraordinary time when you had to be active in order to survive.  Everyone had to pull their own weight and include the spirit of teamwork.  Even when I executed the marathon walks, I always had with me at least one support person, which reminds me, does anyone know the whereabouts of someone named Madhai from the U.K.?

Madhai was with me on that first long trek in 1996?  I miss that guy.  I'm indebted to him.  He had an adventurous side to him.  Can anyone locate him?  I would like to connect with him? 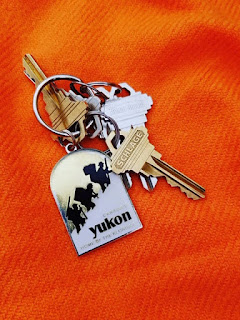