When I was in Mayapura, India, I saw a piece of myself on someone's table.  I'll clarify.  An artist had a booth where he was displaying his wares—copies of painted portraits of bhakti-yogis  Well, I was in that pile of twenty or so.  I picked one up off of his display table, to have a look.

That's me, alright, I thought, and reasoned within.  Actually, I was separated from the portrait, just as my body is separated from my soul.  My body, a temporal object, is what some identify as me.  It's fallacious, at best.  The resemblance of the portrait to my physical self was striking.

Now, lets put me aside—at least the body—and consider others.

I sent a message to my sister, Connie, whose birthday is today.  She's a year and a half my junior. I talked to a woman who had all kinds of questions about life, about the deities, about destiny.  She was a visitor who had her questions answered.  She went away with a Gita and some cake prasadam.  She was happy. There were more ‘others’.  In my brief walk, I greeted all the pedestrians who passed by me.  Our neighbours, basically.  It left a good feeling.

Then in the late afternoon, Paripoorna, a South Indian practitioner, drove me from the park where I was strolling, to Stouffville, where I met a new but growing community, with lots of kids.  I talked of my early days when I became a monk.  I believe that although I spoke somewhat about myself, my intent was to enthuse them toward self-improvement.

May the Source be with you!
2 km 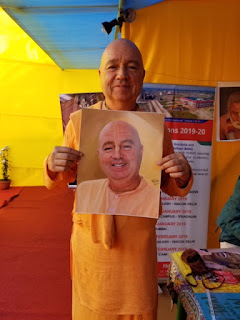 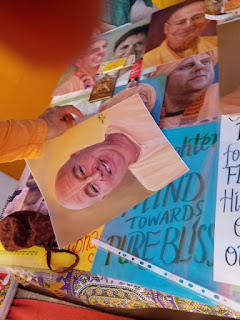