The first bright spot for me on this day happened as follows:

One of our visitors from India, who happens to be just a gem of a devotee, attended the morning sadhana, and just as I was about to deliver the class/talk, he excused himself from sitting there to listen.  The light moment came when his accent came through.

Which one? I thought.  There are many members of the Jewish community in the city.  Then, because of the accent, I began to understand what he was trying to say.  He was talking about going to the place where they exhibit animals.  The zoo.  I had a good laugh.  He didn't mind.

"It is pronounced zoo!" It wasn't easy to correct him, nevertheless the lesson in English helped somewhat.

The second occurred at Bellevue Square Park, where Dave, Michelle and I began our chanting on the grass, when Julie, a young woman of Irish decent, came near us and leaned against a tree, looking quite morose.  I beckoned to her to come join us.  She came over.  We talked.  She felt better and joined us.  We cracked a few jokes.  It was another light moment.

Lastly, before we finished our chant and began walking back to the ashram, another rather lost soul, a pedestrian, tall, dark and gazing at us, was also encouraged to join us.  As he moved toward us, his pants slid down to his knees.  No belt.  Shorts—yes.  He was quite sedate.  After a session of sitting with us—the same dynamic occurred yet again.  He repeatedly pulled them up but the pants would slide back down.  I felt ambivalent.  I was humoured but felt for his lost disposition. 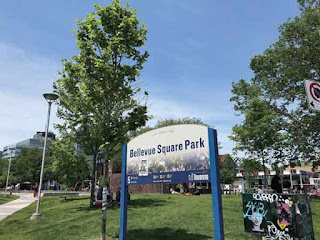 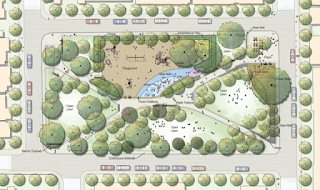