I cannot boast to have put my walking feet to work today.  Dancing—yes!  Regardless, I am somewhat attached, as any walker would be, to my footwear.  When I saw my sneakers missing from the shoe rack, I did not exactly go paranoid.  I was just concerned.  It was an innocent mistake, as it ended up being; an elderly gentleman, a pilgrim, with not the greatest eyesight, who was pacing nearby. He apologized.  No worries.

Bhuta Bhavana, is a young professional, who led us in a discussion on: The Three Modes of Masculinity.  We had looked at what it means to be a male under the influence of either goodness, passion or ignorance.  There is such a reality as masculine toxicity which is often projected through the filters of the lower modes—passion and ignorance.  It is in the mode of goodness that we can experience the ‘responsible male’.  The responsible male is the mode to aspire toward in building our character.

In the evening, artists presented entertainment along the theme of ‘negative versus positive maleness’.  A comedian by the name of Ekendra, from Syracuse, New York, had us in stitches with his portrayal of a fanatical monk from the Black Sea in the form of, "Yama Niyama Das Brahmacari."  His characterization had me moving laughing muscles which had been rather inactive.

So now, the reason for the lack of walking was due to my preoccupation in assembling the premier of our drama, "The Embassy."  Well, my actors, the boys, did well.  One respected member, Kripamoya, from the UK, after seeing the production said, "You've taken our theatre to another level." 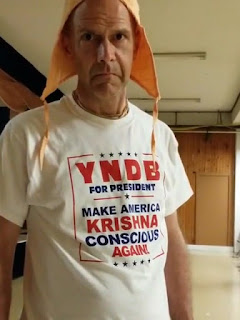 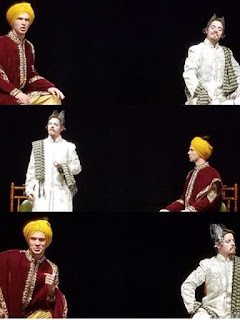