I Began a Trek

I began a trek at 9:00 a.m., going toward the northwest from my starting point, the downtown ashram.  Fernando would pick me up at the 10:30 a.m. spot.  It simply meant I would call him to let him know what distance I had covered of a few streets of Toronto enroute to Brampton.

I moved through Anglo territory, Jewish neighbourhoods, to Portuguese andItalian neighbourhoods, and then Jamaican and Guyanese.  On Arlington Street, I came upon a plum tree.  I plucked one of those blue/black plums.  Several bites of flesh on it were bursts of joy.  On Eglinton Avenue, I noticed an Apostolic church with an open door.

It was a black preacher, a female, on the pulpit preaching.  I walked by, waved to her through the church window.  She reciprocated.  I took a few steps backward, revealing myself through the open door.  All the parishioners looked back.  I raised my arms saying, “God bless!’ and they also raised their arms along with the sermonist in praise of the One.  It was all done in glee and spontaneity.

I kept going west and just beyond the crossroads of Caledonia, after hundreds of “good morning” exchanges with pedestrians, Fernando pulled up with an ‘at your service’ attitude.  We proceeded to ISKCON Brampton, where I spoke from 11:44 of the Gita, and had great pasta, compliments of Hetan, who’s a new student at the University of Waterloo.   http://www.iskconbrampton.com/2019/09/sun-love-feast-sep-8th-2019-vedic.html

I delivered a second class at ISKCON Toronto, and checked out their new Sunday bistro in the dining room, Govinda’s.

Loved every minute of the day! 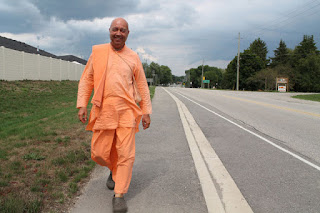