No walking today.  I spent time in travel to Peterborough by wheels, with driver, Ananda Gauranga, and co-passenger, Sushil.  Our mission to this really nice rustic place of 2.5 acres was to marry a couple.  He is from a Hindu background and she, a Christian background.

On the marriage application form, he is listed under denomination as atheist and she, as agnostic.  Now that may look like something very unusual, but it is an age where science rules, and where it is God.  Nevertheless the groom was insistent that I be the minister to marry him and his partner.

Our relationship goes back twenty-five years, when at the age of six, he was painted all blue, and was playing the role of baby Krishna, while I was a blind saint.  We performed with other actors in several venues.  The play "Nandulal" was well liked wherever we went.  His parents were so proud of him then, and now, on his wedding day.  He has gone on to become a physician, as is his new wife.

My short message to the happy community attending was: "Romance has a short shelf-life.  Service between two people is lasting."

After the couple kissed, signed papers and presented gifts, Ananda and Sushil were kind enough to take me to visit my biological brother, Jerry, a resident of Peterborough, a modest city of 80,000.  It was precious time to catch up on life with him.  The six of us siblings were actually close, and we were a ‘normal family’ growing up in post-war Canada.  We all maintained a firm belief in the Supreme, but after talking to Jerry, frankly I'm not sure of his allegiance, though he has devotion and is my bro. 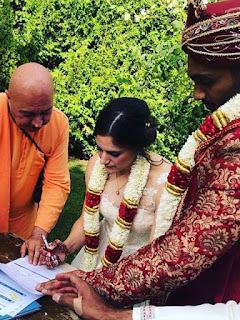