A Birthday for a Walker

Today is the day for honouring an avatar by the name of Vamana.  It’s his birthday.  His devotional claim to fame was his powerful movement of walking mystically to span the universe in only two colossal steps, leaving a final third to be gently placed on the head of the influential King Bali.

For me, Vamana is a significant hero in the Vedic walkers category.  Among others are Balarama, the brother of Krishna, and Vidura, the moralist from the epic Mahabharata.  Pilgrimage was common for people in bygone times, even for retired kings, but the aforementioned persons tend to stand out for their substantial efforts in the field of motion by feet.

I was discussing with devotees in Montreal about Vamana.  I hope that the pastimes of Vamana become inspirational to the residents of the ashram in this town.  Let’s see more walking with spiritual intent.

My driver from Montreal to Toronto is Pradhyumna, who is quite the accomplished musician, and whom I’m hoping will become passionate about doing some walking on a daily basis.  It was he who asked, “How about a walk this evening?”

“In honour of Vamana?  Certainly!”  So I took him around along Bloor Street, passing by iconic places in Toronto, such as the old “Honest Ed’s” department store, the music conservatory, Varsity Stadium, Rochdale College, the Royal Ontario Museum, and I also included, for a laugh, “The Poop Café.”

I could see that Pradhyumna was a little out of practise.  He tried quickly.  Humidity was up.  But that humidity brought on some humility, something we all could do more with. 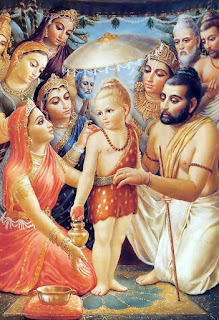 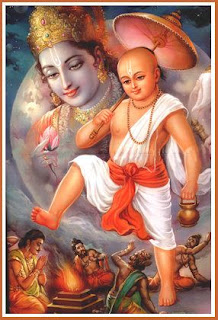