I turned to the sky and pointed in that direction, to the east, encouraging the couple who were arm in arm to: "Look behind you and above!"

They were startled like I was.  Most of us have seen rainbows before but this one was a stunner.  "Oh my God!" said the woman.  "Thanks for letting us know," said her man.

Newly-arrived Pariksit, and Nicholas and I had been conducting our kirtan when a beautiful summer shower (I know it's now autumn but...) came down upon us.  The sun shone in the western sky exposing each and every raindrop.  I knew we were destined for a rainbow.  Our chanting ceased.  We were getting moist and it was time for seeking shelter, so like two other guys we ducked under the kid's slide.  Then the rainbow appeared, the most intense and defined rainbow you ever could set your eyes on.

Now the rain halted.  People came out to do their usual business at Bellevue Square, which is to stroll or to sit on the grass and for some—smoke grass.  Those who were witness were astonished at the beauty of the arc which was doubled.

Rainbows always give people hope.  I'm not sure if they really register with birds and animals.  They usually don't last long, but fade in time, within minutes.  Like all things in this world, there is this temporal quality.

To get to this park, Pariksit and I walked.  We did the same for the return but only after a second installment of chanting.  The grass was hardly wet.  We were fine. 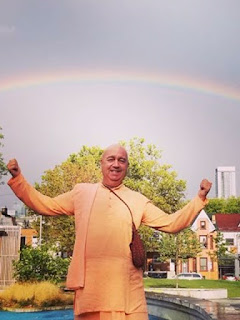