From the Biblical teachings of Psalm 84:10, it is said: “Better is one day in the courts of the Lord than a thousand elsewhere. I would rather be a doorkeeper in the house of my God than dwell in the tents of the wicked.”

The above was quoted to me by one of our resident monks, Hara Kumar—well at least the first line—when I told him that I am enjoying life in the temple ashram. “It is the place of Gopinath (Krishna) and I’m loving it,” I told him. Actually, between the two of us combined, we have been in Krishna Consciousness for ninety-five years, however, he took a sabbatical, for a time, from living in the ashram.

What compelled me to say I like my vocation and location is that I really believe in what I do, and I wouldn’t trade my services and lifestyle even if I were offered to live th life of luxury of a Maharaj, or king from days of yore.

We sometimes read about the opulence of kings in the books of Prabhupada, which also outline the lifestyles of the sages and ascetics who epitomize simplicity.

In the course of my walk with Sanjit today, I contemplated if there were any options at all for another ashram in the city, when I looked at some of the fine houses, on our route, as well as the more modest ones. I would hazard to guess which one I would opt for if I had to choose a dwelling. On the other hand, we walked by a grand Baptist Church, which had so much space, even for a residence. If, by chance, I was to secure such a place for a second temple in Toronto, I wondered if people would come, and if men and women would join as monks? 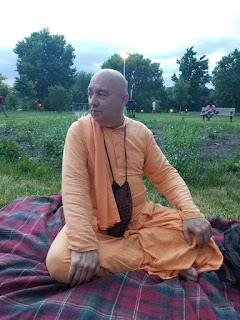