A Bunch of Fathers

We departed for our walk at 6:00 a.m., and turned north onto Yonge Street, going block after block through midtown Toronto, and then uptown Toronto—quite a stretch of 8.9 kilometres. It was a sunny, early Sunday morning. We took to the east side of the street for shade, as the edifices were blocking the beginning of a blistering sun. As we moved farther from the lake (Ontario), it became a steady, rather doable ascent. At York Mills, by the valley of the west Don River, our driver, Nanda, waited at the gas station. He was ready to take us on what was a rare trip out of the city for Aisvarya, of Trinidad, Krishna Chandra (a.k.a. Corrado), and myself.

Owen Sound was the town of our destination, and we made as good time on wheels, as we had earlier on our feet.

I received a call from one of our leaders at ISKCON Brampton.

“Radha Gopinath here.... Can you do a video for our community wishing a ‘Happy Father’s Day?’”

So, before we went out for a swim—that we had been hankering for—in the bay at Lake Huron, Vita, a friend of our host family, took my camera, and, on the first take, filmed the four of us dads. Each had something to say. One of us, Garuda, who was my support person when I walked across Canada, has recently become a great-grandfather. Nanda Maharaj is a proud father of two. So is Tulasi.  And I, being a monk, act as a father to humanity, in some small way.  Aisvarya, from Trinidad, is still single, but is also a father. And Krishna Chandra, whom I predict will be a life-long monk, will eventually be a father for a community.

Vita is very talented and captured us on camera quite well. 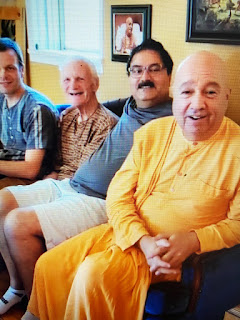