When you walk the streets (with caution re: Covid-19) as I do, in full monk regalia, you do get to see how the public identifies you. In popular Yorkville, on Cumberland Street, despite most shops there being closed, the out-and-about culture is very apparent. So when I ambled along that street I came upon five men chatting. One of them, an Afro-Canadian, broke from his buddies and identified me as a “Haribol!” This I find to be a common address, coined affectionately for Krishna devotees, in some of the Caribbean countries.

“So are you guys happy?”

He gave me his nod of approval and I moved on. And as I did a cyclist on Jarvis Street shouted, “Hare Krishna!” I was astounded as to how many people know us and yet we don’t expose ourselves in public in the same manner as in the past. I realized that, over time, many contacts have been made. I know for sure that many know us through the restaurant, “Govinda’s.”

At the destination point, for this evening, of Wellesley and Sherbourne, I sat to chant the gayatri mantra. Once I had completed it, a young man, South Indian, came to me, saying he really misses the temple.

“When will you open again?”

A group of young white chaps saw me, stopped, and with folded palms said, “Namaste!” one by one.

Then came an Eastern European couple, with japa beads in hand. They were surprised, as was I. They proceeded to sit down and we continued with a cultural chat.

On my way back, I walked through a park in a predominantly gay area, where some fellows were sitting. One asked, “Buddha?”

“No, it’s Hare Krishna,” said another.

People are sorting us out.

May the source be with you!
6 km 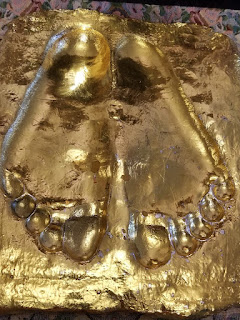 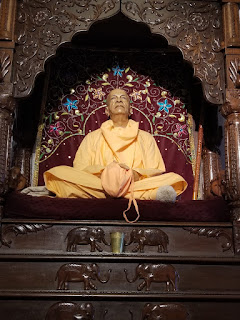