The Trail and the Family

Walking has become a family affair from what I can see.  On the Belt Line Trail Aisvarya and I were seeing this with our very own eyes.  People have become antsy staying at home for two months now.  Except for a young raccoon that walked solo and, upon seeing us climbed a mesh fence, was seemingly lost from his family.

With the sun at approximately 16° Celsius you couldn’t find a better situation.  Singles, couples, and families, people with baby strollers were drawn to the out-of-doors.  It was truly a happy situation.

There was one family, husband, wife and two young boys (one at 20 months), that were halted or stopped on the trail and we found ourselves having to go around.  When dad turned around to see who was passing after fussing with the youngest he stood erect, then bent forward slightly, offering palms together (pranams) and said “Haribol!”

I had to think for a minute.  Oh yes!  It was Dhruva.  I knew him last as a kid.  His dad, Balaram a.k.a. Bill Moore, is a first-class mason and did so much for our temple/ashram in the past.  This is a case of father passing down his trade to his son.  That’s quite traditional as an approach.  A great succession plan.

It was heartwarming to speak to Dhruva.  I recall him curled up like a cat in a chair, when small, while his dad was doing work in our building.  I also remember when I was having a shouting drama practice when young Dhruva burst in, feeling something was wrong, unaware of our rehearsal and demanding, “Stop it!”

Although I am a monk I am into family.  I wish Dhruva and family the best.

May the Source be with you!
13km 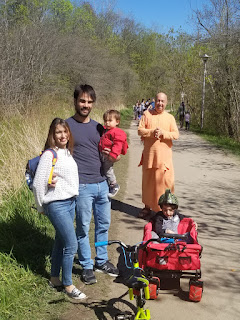 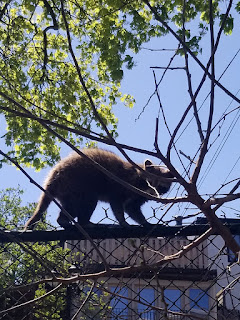