There were four of us, someone from Wasaga beach, someone from Stratford, someone from Etobicoke and me.  We all went for a walk with the route left to my whimsy.  I included in this route alleyways, trails, streets and parks—a variety.  My companions were quite delighted especially in exploring U of T from a different perspective; not as students but moreso as lovers of older buildings of character.  It just so happens that my three companions, Jiva, Nimai, and Jay are all in the business of buildings, especially motels.

Personally I am also a sucker for structures of antiquity.  Canada and the United States are relatively developed (so-called) as of late so we cannot boast of older golden buildings such as Europe or Asia.  The north east of U.S. is way ahead of Canada in terms of established settlements and cities but whatever is there a person like me cherishes it.  A place like Quebec City or even old Montreal are exceptions.

“Old is good,” said one Punjabi gentleman who owned a gas station near the Ottawa River and whom I met on my first cross-country trek.  He was referring to values as opposed to buildings.  I can agree with him to some extent.  Traditional ways have some merit.  Personally I’m happier with a marriage of tradition and modern partnership.

Anyways, our walk of the 6 kilometres was good.  We live-streamed with New Jersey this morning and spoke about the power of the name.  And our superstar down home monk, Corrodo, did a dance of “The Shield of the Lion Avatar” on ISKCON Toronto’s Facebook page.

Tune in to ISKCON Toronto’s Facebook page this week for the following events:

May 5th from 6:30pm – 7pm EST for a Reading from Srimad Bhagavatam
with HH Bhaktimarga Swami

May 6th at 7:30am EST for Morning Bhagavatam Class
by HH Bhaktimarga Swami

May 6th from 6pm – 8pm EST for Special Darshan, Kirtan & Abhishek
An Auspicious Nrsimha Yagna for the Well-Being of Everyone 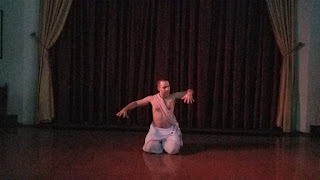 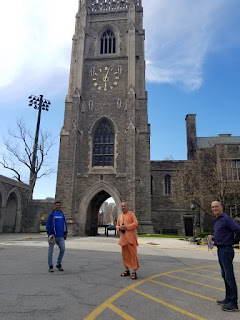