It was a bit of a hard walk, I mean pushing it.  The wind was saying it, “Move along!”  I was happy for the sun.

Taking the bridge over Don Valley is a stretch in itself but it’s nothing like crossing the Hudson River in New York State.  That was a colossal spread.  I remember in 2015, I accomplished chanting four rounds on my beads, a usual half-hour period of time.

Over the valley the name from Bloor Street has a name change.  It becomes Danforth.  At intersection Broadview I turn right and then left at the second crosswalk.  It’s a new stop for me.  It’s the residence of Baladev, a.k.a. Barry Brown.  We met at his front porch, keeping a safe distance, and chatted about the book project each of us was undertaking.

Now Bala and I traveled together as monks in the 70’s.  It was in Greensborough, North Carolina, that we were put in prison (with a third monk) for soliciting without a permit.  What were we selling or distributing?  The books of Prabhupada.  There’s much to the story and we were reminiscing.

My book project is the history of Krishna Consciousness in Canada.  His is the history of humanity.  He already published his but he’s up for a re-write.  It’s exciting.  He’s tying the pieces together and confirming Aristotle‘s statement that the Jewish community hails from brahmins of India.

Chatting went on and I had to retrace my steps for one of those livestream sessions, this time, a reading from the book “Bhagavatam” on the events leading to the appearance of the lion avatar.

May the Source be with you!
9km

Tune in to ISKCON Toronto’s Facebook page this week for the following events:

May 6th at 7:30am EST for Morning Bhagavatam Class
by HH Bhaktimarga Swami

May 6th from 6pm – 8pm EST for Special Darshan, Kirtan & Abhishek
An Auspicious Nrsimha Yagna for the Well-Being of Everyone 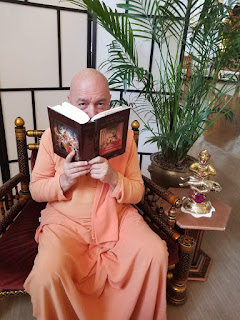