A Walk Between Two Talks

For two locations—Harrisburg, Pennsylvania and Scarborough, Ontario—I zoomed out messages about Mother’s Day and what a glorious day it always is when we honour “Mother.”  For both communities I began my talk about the beauty of motherhood. Mothers give us birth, feed us, nurture us, put us to sleep, protect us, and much more.  “Serve and acknowledge your mom today, if not every day.”

I proceeded, however, to bring up examples of “Bad Mothers” found in the Vedas.  From The Ramayana we hear of not-so-nice women such as Tataka and Surpanakha who were demonesses but then there was the nasty Manthara who ignited the fire of contempt for Rama and who poisoned the mind of Queen Kaikeyi.  Anyways, people can read about it.

In the book Bhagavatam we become acquainted with the sinister Suruci (juxtaposed to the virtuous Suniti) who did major psychological damage to five year old Dhruva.

Enough of the nasties.  I was highlighting Queen Kunti whose character was bold, brave and bright.  Kunti’s prayers are well known to the bhakti-yogi community.  She endured much pain in her life but she took all those calamities as opportunities, reality checks to the nature of this world.

There are outstanding feminine divinities that we adore in our Vedas.  We have Radha, Sita, Rukmini, Lakshmi and more.  We discussed with our two attentive groups the role models we find in Vedic moms and it was sweet.  Between the two talks I had the pleasure to take to the Walkways just east of Yonge. Also—sweet. 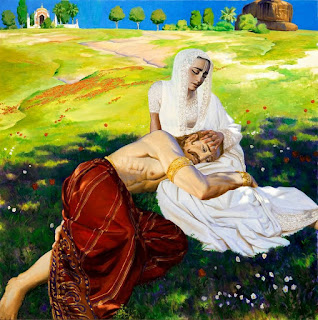