A Trail Where History Lies

I’ve always been a sort of history buff especially when in reference to indigenous lifestyles.  I had taken my walk today along Davenport which is an ancient trail.  I have included a portion of information on a plaque by the Toronto Historical Board.  It reads like this, in relation to where I’m walking:

“As temperatures warmed toward the end of the last ice age (12,000 years ago) meltwater from the retreating glaciers formed Lake Iroquois (now Lake Ontario) covering parts of Ontario and New York State.  The ancient shore remains as an escarpment overlooking the plane on which Toronto is built.  Native peoples beat a path at the base of this ridge to use as an overland and route between the Humber and Don Rivers.  French explorers and missionaries followed the trail to and from Huronia...”

I just felt honoured to be on the path (now covered by asphalt but next to and escarpment with trees) that was tread by people of the past, those who shaped the world for us now, or shall I say, were instrumental in the structuring of what we have now.  In many ways we are puppets that perform under the guidance of universal dictates.  We are small and we are led by destiny which comes in the form of desire and deserts.

I continued this afternoon along the ancient trail where people travel and did all to survive only to die then be born again for more adventures. 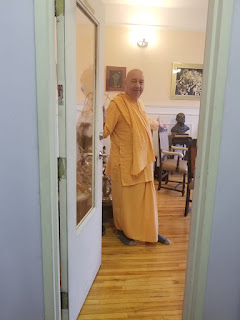