From Vancouver to the Valley

I must give some recognition to a fine lady by the name of Nirmala, who is from Thailand, and now in Vancouver, who came forward to receive her brahminicalinitiation.  Her guru, Krsnadasa Swami passed away, and the task to offer her this second or brahminicalinitiation was left in my hands.  Congratulations to Nirmala for taking this step forward.

Speaking about taking steps forward, the act of walking in the province of BC may for the moment have to be enacted indoors.  The six-hundred-plus forest fires have created a dense smoke throughout, meaning the pollution is at a heavy level in the atmosphere and hazardous to the health.

Nitai Rama and I drove to the farm community of Saranagati where the density of smoke is very present as it is in Vancouver.  I have been coming to the valley for years and have never seen such a haze.  The other day my eyes became bloodshot from the exposure.  Nitai Rama expressed he had chest pains.  People are complaining of coughing and throat problems.  Walking indoors might be advisable.

When the sun did start moving downward toward the end of the day, I ventured on a four kilometre trek, through peaceful mountain terrain, with some residents.  I guess you could say we were addressing ‘cabin fever’.

In recent times, a cougar has been sighted.  There have also been coyotes, deer, the odd moose, rabbits, pack rats, marmots and bears.  I’m not sure if the intense smoke affects them.  What can be said?  It’s the material world, full of dualities. 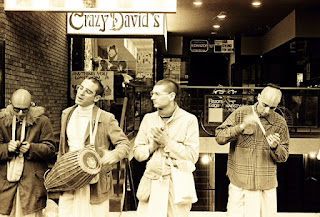