A Small Strip of Spain

Alberto, an Italian-born devotee of Krishna, was right there at the Madrid Airport waiting to drive me for a one-hour stretch to the peaceful Spanish countryside at the retreat farm of Vrajamandala.  Residents number thirty.  There are six children of school age, five cows, one ox and a recently born, five-day-old bull, Baladeva.

The river, Tajuña, runs through the 350 acre property.  It was irresistible to walk from the town of Guadalajara (not the big city) of modest size, to the farm.  Julan Yatra from Tenerife came; so did Madhava from Barcelona, as well as Bhakta Nir from Israel.  We explored and took backways for a 6+ km walk.  The ‘secret passage’, however, turned out to be confusing, so we surrendered to the main road.

There are great walls left over from the Arab period, before the Crusades, so they are ancient.  My companions told me of how, before Christianity established itself, animals such as the bull were sacred to inhabitants.  I don’t know how that fits into the controversial bullfights of Spain. In fact, Madhava pointed out one estate along the road where bulls are trained for the fighting entertainment. Madhava added, “Most of the Spanish are opposed.”  He also mentioned that the town, Guadalajara, is one of those places where they release bulls in the town, and all citizens take refuge of their buildings.

Yadunandana Swami, who is Spanish, is an absolute gentleman, and arranged for me to give a talk about the ‘walk’ that everyone should give attention to. 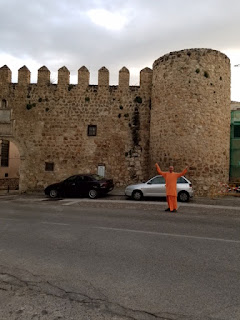 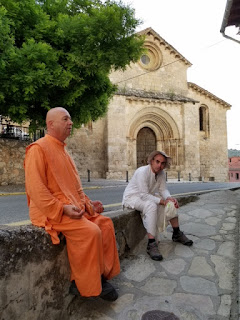 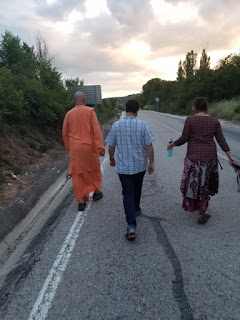