At 9:30 am people started to gather at the park behind our temple, just to the north of us. They were mostly neighbours, very respectable folks. And what was their purpose? To conduct a quiet rally, which had everything to do with walking in this area. To the attendees at the park, and to a group of camera people, five of us spoke about the surging rage of traffic on Avenue Road, the busy—and now busier—thoroughfare to the west of our building. Our point was that we want to widen the sidewalks.

The talking points I made were along the lines of “The city can be safer.” This street has become like an episode of “The Fast and Furious.” Motorist have even hit our building. The sidewalks aren’t wide enough. Even in pre-Covid times you would have to leave the sidewalk and go onto the street to make room for another pedestrian. Some motorists take it as a raceway. The noise from their revved up engines is uncalled for. This is primarily a residential area. We need pedestrian friendly sidewalks.

Banners were held up and all were chanting “We need wide sidewalks, NOW!” Just after our speeches there was a solidarity. This coalition amongst neighbours has been building up for three years.

At off-time I did speak with one James Brown, an architect for street improvements. He was talking about not only expanding the sidewalks, but introducing a linear park with bike lanes. Now that would be nice. A little closer to paradise or Vaikuntha (heaven). Getting pedestrian friendly. 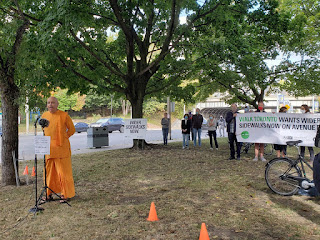 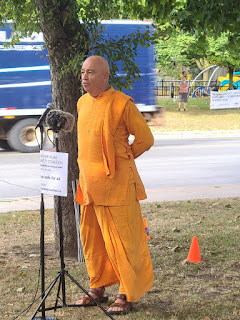 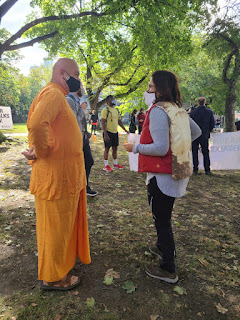