Karuna and I traveled safely, in our temple car, to the location of my God brother, Girijadhava. He and I sat outside, safely in the backyard, not just to “shoot the breeze” and speak about the current socio-political situation in the world but to, in a way, go back through a time machine. I was basically interviewing him about his time as a monk, living in the ashram in the 70’s, what led him to that and how he feels about that experience before he settled down to marriage and had a daughter.

The purpose behind the back-track was to gain material for a book on the early days of the pioneers of Krishna Consciousness in Canada. Giri played a major role in helping to establish this higher consciousness by promoting literature. As he recalled, “We went on Yonge St. with these huge bags for carrying the smaller publications, in addition to lugging a box of heavier hard-bound books for approaching the public.” Perhaps for the first time, western folks were taking an interest in eastern thought through cultural curiosity. The philosophy and the stories of Krishna were novel.

I also recall those times on the street, meeting people. We made our own incense and we would stop people with one of those sticks to engage them in conversation and then show them a book. We spent hours outside, even during the winter. For me it was quite the adjustment, having come from a farm, out in the country, and now being confronted with the passions of a growing city—the hustle and bustle. Nevertheless they were good times. As Giri himself says (and he’s a businessman), “Those were the most conscious days of my life.” 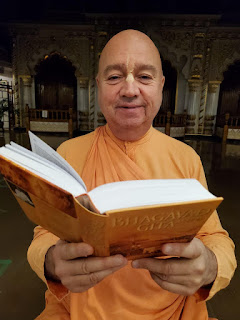