I was walking near the new Yorkville Mall when the threat of a rain storm compelled me to search for shelter. Well, there is such a place at a side entrance, a fair expanse. It was there that I met a fellow with a coffee cup in hand who approached me in a jovial manner.

“Are you hare-ing?” he inquired.

“Excuse me?” I asked, not sure of the word he used.

“Are you hare-ing?” He asked in a higher tone.

Of course, I took it that he was saying, “Hurrying.” After all I was a little anxious about staying dry and I guess my pace was perhaps more than a stroll. I picked up on the joke.

“You’re not hare-ing?” He persisted with a smile.

“Well, I guess it depends. I’m hurrying and I’m hare-ing.” After all I was chanting “hare hare” on my beads at the same time while pacing.

“So you’re not hare-ing?” So I played the game and stroked my bald head with my free hand.

“Well, I’m definitely not hair-ing up here.” And he broke up in laughter and so did I. At this point we parted. I went one way; he went the other.

Through a maze of streets and alleyways, I went and came back, full circle, to the entrance of the mall when I happened to see my friend once again, on foot, fifteen minutes later, with coffee still in hand.

“Yes, still hare-ing!” I was happy. “Hare” is a sacred sound. To utter “Hare” is good for anyone. 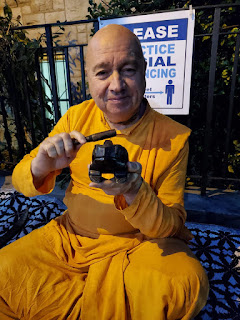 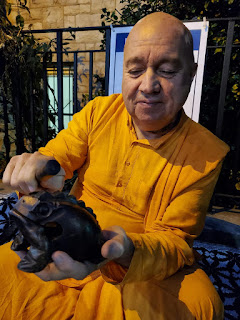