Spiritual seekers at Southminster Steinhauer United Church (my venue) were my audience for a talk on "Tails from Trails".  That was last night.  The congregants who came were really sweet.  I think they found the life of a mendicant walking across Canada very interesting—everything from the practical aspects of trekking day to day, without stoppage, to the theology I've adopted, which drove me on with a passion.  Mantra meditation followed the talk, with a slew of questions.

Tonight a program of the same sort was held at Grand Cafe on 108 Avenue.  Fadi, a Lebanese man, owns and operates the Café—an amazing good-hearted guy.  The place filled up with attendees occupying the whole space.  So, I told of my tales, some new ones and some repeated from the venue yesterday.  They were stories of kindness along the road, of life-threatening occurrences, of sex propositions, of pain and of glory, all sourced from the memories of my U.S. walk and the four executed across Canada, Vancouver Island to Newfoundland.

I met people there who have given up their cars in favour of walking.  That's progressive.  My kind of people.  I hinted at messages from the Gita, and I dedicated my talks, in both locations, to George Harrison, who died of lung cancer eighteen years ago, and how he inspired me to the Krishna thing and to eventually becoming a monk.

I also mentioned that George's son, Dhani, had a best friend known as Benjamin Barnes, and how he, Benji, graciously, was my main support person on my second Canada walk in 2003.  Thank you to him. 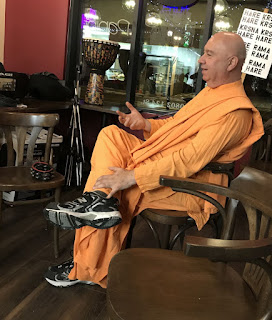 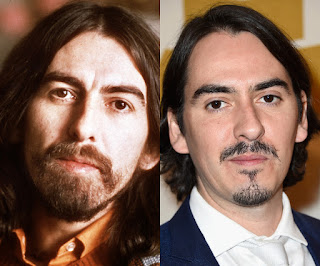