The World Is Looking

The whole world is looking, once again, at US internal strife. This time a group of protesters stormed the capital building in Washington DC. It was a mob scene and it was ugly. It was described to me when I was on the phone with a friend from Vancouver, during the time that I was polishing brass in our temple. My immediate response, as I listened, was that it is shameless behavior on the part of the former US president simply being a poor sport.

I later took to seeing some visual coverage of the rioting myself on my phone. The worst of this disaster is what some spokesmen say is “a sad moment in America’s history” while protesters go off saying there was no violence and that they are proud of their aggressive march. Lo and behold, people were hurt.

Up here in Canada we are very concerned. We love America but there has been a sick person in charge. Let us pray that things settle down and that the new President, Biden, can rule peacefully and with integrity.

As usual I took an evening walk, this time on Bloor Street, ambling along passing by Christmas trees laid out in front lawns for garbage pick up. That’s something I also don’t feel very good about — the killing of thousands of trees for what’s become a major commercial event.

Anyway, I made it to Bloor at a time when it’s supremely quiet; where shoppers are usually all around during pre-Covid times. I was walking and the mantra was moving through the street lights. We need more mantras and less insanity. 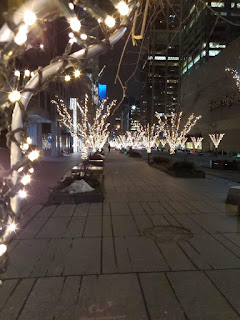