Classes not in Masses

Congratulations to two blossoming Bhaktins in Montreal, who accepted diksha (initiation) via Zoom. Both Russian-speaking devotees have been active in the community for some time now and I’m happy to see them step-up to the occasion. Both ladies accepted new names. Zoya’s is now “Yamuna Priya” and Natalia accepted the name “Ganga Priya.” The initiation was executed from afar. Ganga was in Montreal’s temple, while Yamuna was in her apartment. Their friend, Dimitry, was the translator, at his Montreal home, while I was on my seat in Toronto. I joked that I gave names of sacred rivers in India, “They are almost as pure as the St. Lawrence.”

This amazing day of sun drew many people to the park across the street from my residence. Ramsden Park was teaming with energy. People want out of their homes. They want sunshine, air and to see each other. They took advantage of every ray of sunshine.

The same sun shone over Niagara. From a different seat in the same room in Toronto I gave a class on the theme, “Less Covid, more Govind.” More attention should go to confidence as opposed to fear. The media must offer hope and a positive outlook.

A third class for today, also on Zoom, was for an Oakville group. We are studying the nature of whimsy, termed in the Gita as “demoniac.” Directionless living is a common trend. Need I speak again about the sampling of the mob scene in DC this week? It is maddening.

My Final meeting for the day was another visit to Ramsden park, this time to meet a homeless devotee who now has an apartment. The only thing is he didn’t show up. Perhaps he had forgotten the appointment he wished to lineup? Another occasion will arise. At this time of year I’m usually in Trinidad or Guyana, engaged in chanting or swimming at the beach. 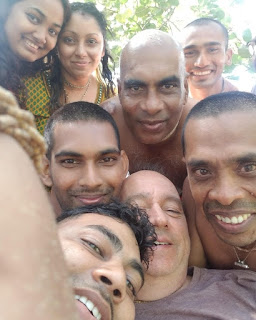