You just never know what happens in your own neighbourhood.  Not intending to go on an adventurousness stroll, I simply stumbled upon new things, like discovering tennis courts, quite substantial in size, on the other side of the railroad tracks.  I also never knew of a mysterious walkway that connects a city block in a residential area.  It was so obscurely located, who would even know it was there.  It just took the turn of the head at the right moment and there it was—a quaint alleyway, beckoning a pedestrian to use it or avoid it. https://www.instagram.com/p/B76WAEFglqp/?igshid=1sxe1yypmevqw

The most surprising thing to my eyes was seeing what was going on in another tennis court area.  These older men were out in winter jackets flickering their tennis rackets with the real thing—hitting tennis balls, and in the month of January with packed snow all about.  I know it's a mild winter but this is unheard of, at least unseen in Toronto.

The most exhilarating thing to not only see, but participate in, was near the Cottingham Elementary school.  As I was walking on the sidewalk next to the school's playground, with kids at play, I heard a few remarks like, "Oh My God!" and such, in regard to the rare monk attire.  The ball that a group of kids was playing with got out of control, and rolled its way from playground, to sidewalk, to street.  It halted right in front of a driver's car, now wedged against the front tire.  The driver was ready to go forward, not knowing of the fatal ball beneath, when I decided to step in.

I stopped right there at the car held up my hand as if to say, "Don't move yet!" Then bent over to free the ball, held it up for the motorist to see, and then thew the ball back to the students.

"Thank you," said their teacher. 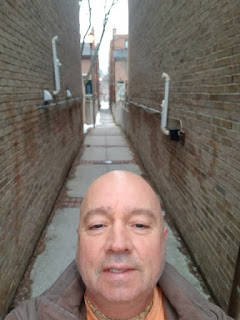