For a third consecutive day, our Govinda's Restaurant was put to good use.  It catered two hundred guests at the YMCA on Thursday.  Last evening, we held an appreciation dinner for our drama troops of the January 1st  "The Gita” production.  That was nice.  And then today, I sat with members of the wedding party for Narayani and Kent, feasting like crazy after marrying them.  Govinda's keeps busy.

Now, about the wedding, held in the temple room—it was simple and sweet.  Narayani and her family hail from South Africa.  I gave her diksha initiation some years ago.  Kent, her bridegroom, has roots in  China, and in 2018 he joined me on my first leg of my walk on the Bruce Trail in Niagara-on-the-Lake.  Both he and she first met at the bank where they work.

As conductor and ‘solemnizer’ of the ceremony, I asked the couple, sitting there on royal-looking chairs, if they would like to make up their own vows.  I asked Kent first.  This put the both of them on the hot seat but they were loving it.

I repeated myself and added the last name.  "I Kent Tse..."  which sounded like “can’t say.” That had everyone in a roar.

Anyway, they are nice people.  I had Kent's parents next to me while driving.  I wish our new couple well.  Good human beings.  It was suggested they have four children. 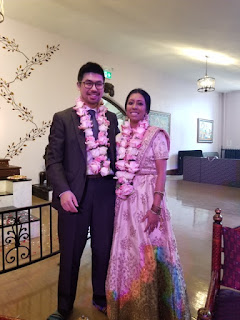 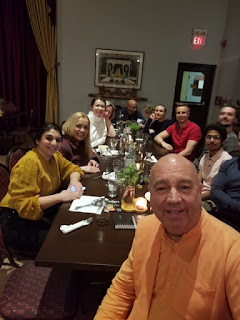