Corrado and I are preparing for the India trip, and before we do so, we are needing to pick up a few things.  Yes, things like bows and arrows, and swords, and perhaps some other weaponry.  Nothing too lethal, mind you.  It's more like goods made of rubber and synthetics for a scene of conflict in our up-and-coming drama, "Grandsire."  The Vedic texts that I draw my script from demonstrate colourful battle scenes.  The story will be about Grandsire Bhisma.  We will stage it, film it, and then take it around a bit.

Corrado and I hiked to McCaul and Queen Streets, to Malabar's Costume House where we picked up the best of their rubber swords.  They look good on the stage from a distance.

The man behind the counter was curious.  "How long have you been with the order (as a monk)?"

"I have so much respect for you guys," he remarked.  He also told us he would go to India one day.

"When you decide, I'll give you some tips as to where to go," I offered.  I got the impression it may take some years before such a dream materializes.  He's got a good heart and a good dream.

"I heard Delhi is not the place?"

"If you want cars and noise, it's the perfect place," I said reassuringly.

He read my card and on the backside it had the maha mantra which he scanned.

"So guys, what's a couple of monks doing with some rubber swords?"

I told him of my dramas, my walks and about our food.  "Check out Govinda's Restaurant.  It'll kill the maya, the illusion within you. 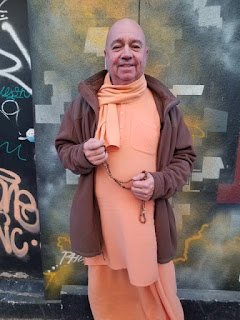 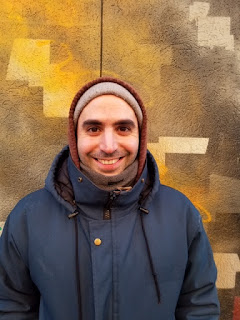