At Kolkata Airport, we heard over the loudspeakers, "Subash Chandra Bose", the actual name of the airport.  I took the opportunity to tell Corrado about this  war-time hero, who was largely responsible for liberating India from British rule.  There is more to the story during Gandhi's time, when India achieved its independence.  Bose played a major role during the negotiations which, from his standpoint, were not up for discussion.  His message to the British was to go home.

Corrado and I were standing at the baggage claim and were most delighted when our luggage come down that carousal first.  What good fortune!  We were thrilled to see two comrades show up, actors for our production "Grandsire", and both from South Africa.  Once we had gathered the four of us, Jambhavan, Cronje, Corrado and myself, we seemed then to be destined to journey on the bumpiest road on earth to reach Mayapura.  https://www.instagram.com/p/B8No7G8A2i0/?igshid=1j3vaqrccl0yv

Our driver, Vinay, at one point, needed to take a break, have some snacks, and fuel up, and that presented the opportunity to get some walking in, aiming toward the sacred dham. When Vinay was ready for Cronje and I, he picked us up and on we went. But while we walked, we talked about history again and Cronje gave me the rundown on South Africa's gloomy and glory days involving the Dutch Boers, the French settlers, the Zulu interaction, British invasion, and the concentration camps.  He took me right up to Nelson Mandela in the history lesson.

Our final hour in the taxi had us absorbed in dozing, chanting and reflecting on the history of Sri Chaitanya which is not mundane. 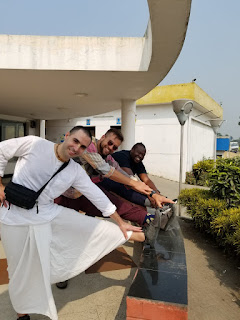