Everyone Must Find Their Fit

Security cameras are being installed in our temple.  It makes a thief think twice about lifting something of monetary value, or otherwise.  Some people have no qualms about taking from a spiritual place.  It is desperation that leads a person to such wrongdoing.  The decision to go the length of drilling into walls and in-laying another set of cables for cameras was made as a pro-active measure.
While the workmen were going about their business, some of the members of our community were honoring their guru’s birth anniversary with song, praises, and prasadam.  This high-spirited event was followed by “An Evening of Bhakti”, held in the same temple room.  Seventy to eighty people came to participate in a mellow version of kirtan.
About two months ago, I asked Amala Purana, a music teacher by profession, to take the lead with the musical arrangements and be the main person behind the mic.  She has been doing a marvelous job.  It is just the service she has needed.  There is a place for everyone in the area of seva, service. She has found her perfect fit.
In our morning discussion, the topic was brought up that Krishna, with all His wisdom, has designed the world in such a way that everyone has a function and a particular contribution to make.  Krishna’s contemporary, Uddhava, became a noted advisor and counsellor to many of the nobility in the time of Vedic culture.
This particular point became obvious during the “Bhakti” evening, when our master cook, Dwarkanath, demonstrated his expert culinary skills.  “Try this,” he said, as he poured some coriander coffee from a pitcher. I sipped. It was divine. 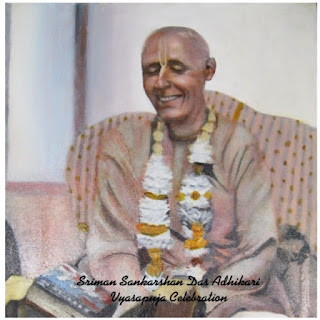 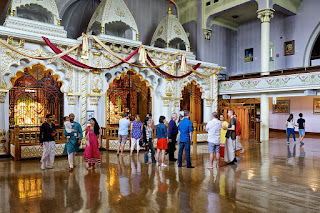