A number of us were regrouping at the Buenos Aires Airport when a Chinese gentleman, who had just visited Antarctica to see the penguins in action, stopped in his tracks to look at me.  I guess I was his next penguin.  Our eyes met.  I offered my pranams(palms together). He smiled—"Who are you?"

I read his eyes and responded with lips and tongue delivering my name and identity: "I'm a monk, a Krishna monk.”

Somehow, he had some reference to the ‘Krishna thing’ and the India connection.  He was very interested, up until other members of the crew off the cruise showed up.  Anyway, a moment of bliss for him, me, and my friends became a reality.  I always share a mantra card with someone like that.

After bidding farewell to friends and going through security, I met an elderly, Hispanic gentleman who saw the empty seat next to me.  I gestured, "Please!"  Instantly, he wanted to know of my "religion."

He expressed that he was Catholic and had some affiliation with Jesuits.

The time at the Miami Airport was a nightmare.  Most of us passengers were in transit.  The lineup was long, moving at a snail's pace.  Not enough customs officers were there to handle the crowd.  When I inquired from personnel, it wasn't a helpful situation.  Toronto's Airport—fine.  Not always.  What are you going to do?  In the ’70s, Krishna monks shared a past with airports.  In '96, during my first walk across Canada, I walked past a B.C. gas station on foot. A fellow pumping gas remarked, "He's a long way from the airport." 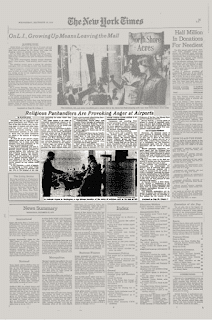 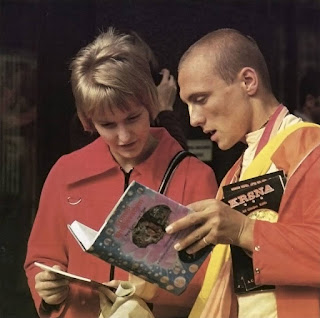