I’m certain that passengers on the 8:00 a.m. flight to St. John’s, considered Marshall and I—who were in devotional apparel—to be connected to the omnipresent scene of Hallowe’en.  But no, both of us were, and are, genuine monks.  Jon Peters, who picked us up at the airport, knew me all too well. Thanks to Krishna, Marshall came in from Montreal with a mini harmonium strapped over one shoulder, and a mrdanga over the other.

Off to the campus of Memorial University, we went, to meet one of the chaplaincy’s members of the Jesuit order.  To him, we were true-blue Hare Krishnas.  We had a good chat.  He recalled seeing a group of us chanting at a Pro Life event in Queen’s Park, Toronto, in the early eighties.

“You were all chanting, and you had your food,” he recalled.  (I’ll refer to him as ‘Father’ from here on.)

Father asked about our community in Canada, and I was able to explain that, both here and in the U.S., our society went through its share of struggles trying to get established after our guru, Srila Prabhupada,  initiated the movement in 1965. “We were a curiosity then, tolerated, but now we are accepted. And that has been in a large part due to endorsements from theological academia, the support of the Hindu community, and our own endurance.”

I was interviewed on the campus radio station, CHMP 93.5 FM.  “At Halloween, people dress to be someone else. But in truth, we will always remain as the self, the soul, despite even the reincarnations,” I expressed to the listeners.

Jon, Gordon, Marshall and I took to walking at Quidi Vidi Lake.  A pigeon on the path appeared to be leaving its body.  Jon picked it up and put it in the bushes. Then, I chanted mangala charana mantras.  Notably, today is the anniversary of the passing of our guru, Prabhupada.  Marshall and I made this our meditation. 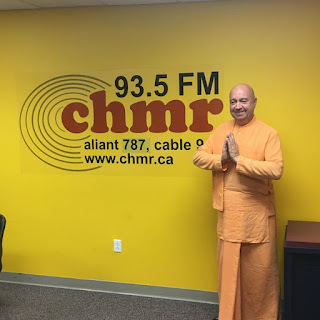 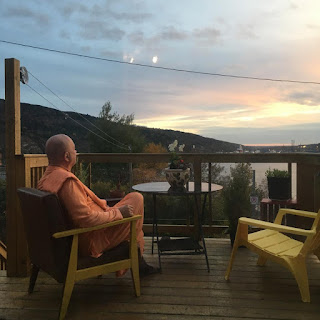