Much as I like walking, I also like taking the train.  I suppose I did have some choices on how to get to this bedroom community of Ottawa.  One option was catching a ride with other commuters going from Toronto to our Canadian Leaders Sanga.  Walking was not an option.  It would take me at least two weeks to get to Russell.  Out of the question.

I like the train because of the ample leg room.  Scenery is nice.  I see a gorgeous trail running edge-wise along Lake Ontario.  It is mouth-wateringly tempting.  https://www.instagram.com/p/Bp-4OszA7SG/?utm_source=ig_share_sheet&igshid=109ehdkcksobj

I also had my peaceful moments.  I enjoyed reading from Mukunda’s book, where he describes the recording of the maha mantraat the studio on Abbey Road, London, when George Harrison insisted there be some multiple voices to support the main singer, Yamuna, who had that golden voice. George was practical.  He brought in some secretaries, agents and janitors, whomever he could grab, to create a greater volume of sound.  It was spontaneous and it was teamwork.  I love the book, Miracle on Second Avenue.

Okay, so I arrived at Ottawa’s Via Rail Train Station, where Mandala, one of my support persons for the U.S. walk, picked me up, and then dropped me at the arts building in Russell.  There, a group of us conducted a Govardhan Puja, which is done in India.  The story, in short, describes how young Krishna raised an amazing rock. The Herculean feat is honoured all over the planet on this day.  He executed the feat long before the invention of the train. 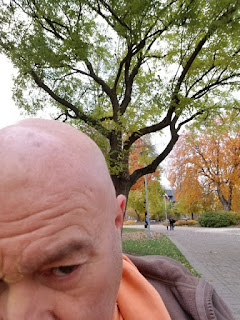