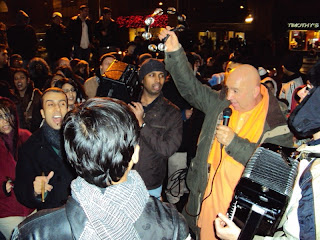 It is customary for members of ISKCON, monks and laypersons, friends and the like, to gravitate to urban centres at New Year's count-down. What a remarkable way to usher in a year of promises! 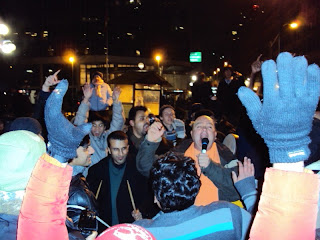 Our routine in this city is for chanting enthusiasts to jam themselves into subway cars and head southbound for Queen St. As the doors to the subway car close, all eyes are on me to take the lead in chanting. I must spontaneously pick a tune, and so at this night what came to mind was a popular tune established by legendary sannyasi (monk), Vishnu Jan Swami. The public in the subway car, mostly youths, picked up on the spirit of the chant and the beat of the drum played by one of the stars of our youth, Keshav Sharma. As we approached busy Queen St., I hit a nerve of caution. There's often security, city police, standing at the subway doors. I was feeling a bit sensitive about that. In fact, one year, as the doors to the subway car opened, a sudden blast of mantra with drums and loud cymbals blared out into the underground funnelled corridors where the public walked. I was rather boldly chastised by subway security. I remember what one irate officer said, "Listen, you may be having a good time, but others may not. Stop the noise!" 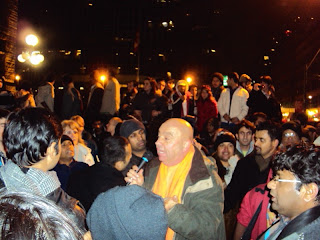 For two hours we stood in front of the handsome Old City Hall and let the pulsation of mallets striking the drum and chant hitting hearts take over.