I’m going on close to one week since starting my two-week quarantine. It’s relatively an easy one to tackle. For members I also want to acknowledge that this year marks 125 years since the birth of His Divine Grace AC Bhaktivedanta Swami Prabhupada. Celebrations have begun to recognize his great efforts and contributions to this world.

As expressed in words in a recent letter to me the other day, referring to Prabhupada as “the one who I believed radically changed American society in ways that are still not recognized.” Cutting-edge Guru is the term sometimes used to describe his great work in making cultural changes to the world.

Also, about this year, is it was twenty-five years ago that I started my first marathon walk; an 8000 km trek from West Coast to East Coast Canada. This was in honour of our guru’s centenary. It was also a unique political situation for Canada. In 1995 we almost lost our largest province, Quebec; they wanted to be separated. Partially my walk was to celebrate a victory towards keeping it together as a nation. The votes were close.

It was in early April that I began that walk, which has become such a big part of me. 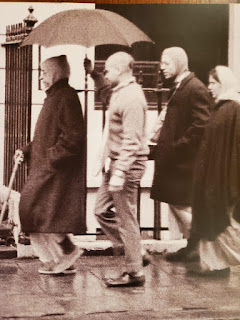