One of my dear friends from the area, Mr. Prasher, gave me good news. In India, Vrindavan and Varanasi, two sacred places in the state of Uttar Pradesh, are going back to old ways. Restrictions on animal slaughter and, according to him, liquor sales are now implemented. Good news indeed.

Now, how far such restrictions are enforced is another matter. India is traditionally the land of dharma, meaning a place of high principles, but with a thousand years of invasion, influences are such that it has been hard to maintain its ancient values. It has been going in reverse in certain practices, however, the above mentioned news is superb and I pray that the return to old values will stay.

I cannot help to think of how our guru, Prabhupada, left India for a spell, to see if some Westerners might adapt to bhakti and to see to the protection of animals from slaughter. He was quite firm that his students abstain from liquor, drugs, casual sex, smoking, meat eating, etc. Who will not admit that these habits are demoralizing?

Anyway, I’m happy for those select areas of India. Perhaps a contagion can influence more places to do the same? We are to understand that we live in a kind of dark age (Kali), which is often defined as quarrelsome and hypocritical. It is a fact that we could never turn things around completely to realize a paradise on earth but with a strong will and the matching strong push, there is every reason to believe we can come closer to Vaikuntha principals; some semblance of the spiritual realm. 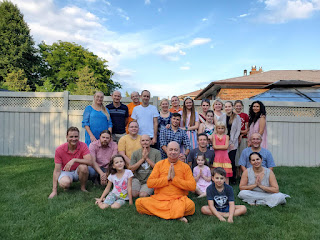