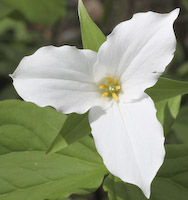 Don’t Step on the Trilliums

We were careful not to step on the trilliums. They are the provincial flower and are highly protected. If someone’s caught transplanting them, you can get fined. They are three petaled peaceful flowers, and come in colours of white and red to burgundy.

A small group of us wanted to make an escape from the city for a few hours. We headed north for the pristine town of Owen Sound. Something special happens here every Sunday, it’s kirtan, discussion and prasadam (spiritual food). The Hanna family that hosts the program weekly also stages a mantra rock show, provided the bass guitarist is there; people love it. Those of us who came from the city were not lucky enough to fill our ears with the rock music that incorporates beautiful Bengali songs. In its stead I volunteered to talk to the group in what’s called Mud Town Centre, which was once the local community centre for black slave descendents who escaped during the US civil war. It just worked out perfectly that Garuda Hanna, now 65, and his son, Tulsi, accompanied me on my first cross Canada walk in ’96. We couldn’t resist letting everyone know about our awkward interaction with police, encounter with bears and the crazy miracles that occurred.

With just great weather, we allowed those of us with ghost white pigments to get the sun’s exposure, while the brown toned amongst us savoured the rays. Our obvious trail was the Bruce Trail, Canada’s oldest and longest foot path, a 900 km meandering trail of mainly escarpment, woods, caves and waterfalls.

This is where we spotted the trilliums. What can they remind you of? Could the petals represent the three modes of nature? Or the three deities of creation, maintenance and annihilation? Somehow it’s cool to make a Krishna conscious connection. It’s always good to make that spiritual connection to everything you see and do. 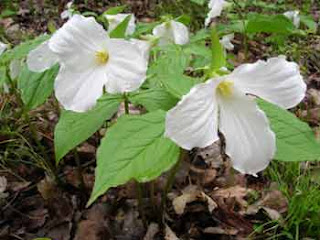 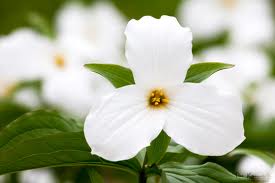 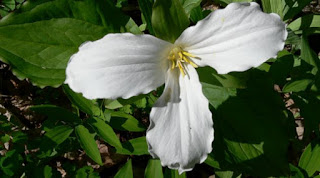